WHAT ARE THE MOST COMMON ACTOR TYPES? Ask an Agent 4 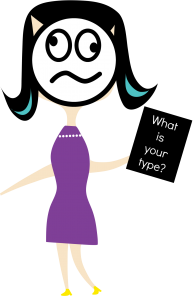 This is a question that comes up all the time! In fact, one of our most visited blog posts, is a post about actor type – check it out!

If you'd like to work on getting very clear about your own “actor type” you should check out our type worksheet that is a part of our Prepared Performer Business Tool Kit at www.YourPerformingArtsCareer.com
If you’d like to submit a question to Anthony Boyer, Agent with DDO/Stage 9. Please go to http://www.AskAnAgent.today

QUESTION: WHAT ARE THE MOST COMMON ACTOR TYPES?

“Type” is one of my favorite things to talk about. There are certain aspects of it you can't change: If you're a coloratura soprano, you're probably not going to go out on alto belter roles. If you're a legit operatic singer, you're probably not going to do a lot of productions of American Idiot (though more and more performers are able to cover a lot of ground musically).

It's important to know your limitations, and to not waste your time pursuing those opportunities (though you can certainly spend your time getting better at those skills!)
But “type” usually refers to things like physical types – are you the ingenue, or the soubrette, the comic relief/character actor, or the romantic lead? And to these, I greatly encourage you to think outside of the box. Sure, it's important to know whether you're an Ado or a Laurey; a Will Parker or an Ali Hakim. But there are going to be so many people saying no to you over the course of your career that I don't want you to be one of them.
Look at it this way: Let's say you pour your talent through a funnel. The funnel is the number of people – casting directors, directors, choreographers, musical directors, producers – who are going to say no to opportunities. What comes out at the bottom are your opportunities. Shouldn't you start with as wide a funnel as possible?
If a theatre is doing, say, five shows in their season and you only submit on one of them because that's the only one that fits your type, at most you're going to wind up with one job in that theatre's season. You – a prepared performer, who has trained on how to sing, how to act, how to dance. Who has put in all of the work necessary to build your vocal palette; to bring depth and shade to a character. You will – at most – book one job in that season. But what if those other four shows have roles that you'd be right for, if only someone was able to see you in them? Well, let them see you in them! Don't say “no” for other people. Prepare for those roles, as well, and go in and give them you. The number of times that theatres go against type is astounding.
Right now, I'm working with a theatre to cast a very prominent belter role. The theatre has literally been looking for five months; they've seen all my big belters, and have turned all of them down. In talking with the casting director, I learned that they're really looking for someone who won't go in trying to peel the paint off of the walls. Who will let the song build, and then deliver the money notes. I've got a mezzo mixe on my roster, and I asked them to let me put her on tape, because I think that – even though she isn't going to deliver those “power notes” the way most people expect them to be delivered – she's going to perform the rest of the song perfectly, and she's a heck of an actress. They agreed; I sent them the tape yesterday… the casting director called me right away and told me that it was perfect, and now she's going to a callback for creatives this week. All because we were willing to work against “type.”
So yes, it's important to know what your type is, but it's also important to know what you can do, and how that might fit into roles that don't traditionally fall within your type.