I saw a really fantastic production of Shrek the Musical this week at 3-D Theatricals. I had never seen Shrek before, and while it was really clever, funny and touching, and I loved some of the songs, others songs didn't quite jive with me. So, I started thinking, what is making this show so great?

It all came down to one word.

These performers and crew members were clearly giving 100% commitment to this piece and their individual roles. I could go into so many details about the direction, choreography, sets, costumes and MAKE UP, but I'd like to just touch on a few things the performers did that made this show work so well. And, I'd also like to talk about why this is so important as a student.

1. Committing to your choreography 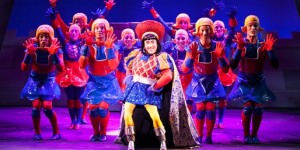 “We practiced this part both forward and back.
We make one mistake, and we get the rack!”

As I heard those lyrics I thought, “Ha! I totally believe that.” The choreography in this show was clever, however not anything totally crazy dance wise… at least not to the average viewer. What was really fantastic about it tho, is how CLEAN it was. They were clearly so well rehearsed and attention was paid to every little detail. It would not have worked otherwise.

2. Committing to your character 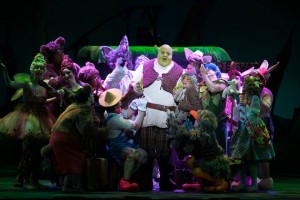 I often have my students make a big ol' list about the characters they are playing. This list encompasses several types of traits including – physical, vocal, personality, details from their history, what they want, and how they get what they want. Once we go through these lists we start to define clear choices for the characters they are playing. If an actor commits fully to these choices, they are so much more believable. The audience is pulled into their world and believes that it exists, because the actor believes it exists.

If these actors had not fully committed to being a big green ogre with a scottish accent (T.J. Dawson as Shrek), a little man with legs so short he had to walk on his knees through the entire show (David F.M. Vaughn as Farquaad),  we as an audience would not have gone for it.

There is also a whole entire number between Shrek and Fiona (Melissa Wolfkain) in which they burp and pass gas back and forth at each other in a musical war of sorts. There was not one ounce of half-way about this number. Often, my students will be embarrassed about committing fully to a character and then only half-commit. I know it is hard to get out of ones own way, but it drives me crazy. If we could let down our walls and be brave enough to give it their 100% commitment, we would have much less to be embarrassed about.   Kudos to the entire cast for fully committing to their crazy characters.

3. Committing to your craft

I saw this show on a Saturday night, which means they had already done shows on Thursday, Friday and Saturday Matinee. That means that T.J. Dawson, as Shrek, had to be in his seriously CRAZY make up which basically covered his entire shoulders and head with some sort of rubber. I'm assuming latex but I'm not sure. There was not one sign that he was tired, or sweating his booty off, which I'm sure he was.  And, if David Vaughn decided not to commit to the idea that his character was only 3 feet tall, the joke would have been completely lost. 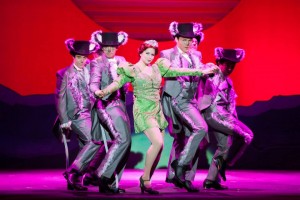 I'm going to start again by talking about T.J.'s  performance of Shrek.  I've known T.J. for several years now, but I've never seen him perform or heard him sing. We both had kiddos at the same time and he is just back to the stage after a 3 year daddy hiatus. He had great power when it was needed, but what I was most impressed by was his smaller high notes. They were so controlled and so lovely. Even with all he was enduring physically with that crazy make up, nothing splatted where it shouldn't have been, everything was perfectly placed. Melissa Wolfklain as Fiona also provided a great example for something I'm working on with many of my female students. Many singers have a hard time knowing whether to sing something in their head voice or chest voice. I've encountered a few singers who don't ever switch between the two, they have this magical seamless mix that is sweet and balanced at all times. However, they also sometimes lack the full power of a true belt. Melissa provided a great example of negotiating her vocal placement, switching seamlessly between her belt, her head voice and a more “mixy” sound.

I have several students at the moment who are CRAZY committed to their craft. They bring their full audition book with them to every lesson. They not only warm-up and practice their exercises, they also do their research as actors, do the homework outlined in the 6 Steps to Acting with Less Effort, AND they practice their material so they are memorized and ready to work when they come into their lessons. These students are SOARING! I have seen great growth in their technique, in their confidence and in their ability to know exactly how to handle an audition. HOWEVER I also have several students who are NOT doing this at the moment. I am not going to pretend like I'm not seeing any progress in their skills as performers, because they are improving as well. But, they are clearly not progressing as quickly as they could be.

When you go into a voice lesson not knowing your music, or without your book your teacher can only get you so far. If you TRULY WANT TO SUCCEED AS A PERFORMER… YOU MUST FULLY COMMIT!  What does that mean? As I mentioned earlier, you need do like my top students are doing  – FOLLOW THROUGH when you are at home.

If you commit to all of this as a student, you will be able to commit with NO EFFORT as a working performer. It will become a habit that you won't even have to think about. Instead, you'll be able to actually ENJOY PERFORMING, and the audience will ENJOY YOUR PERFORMANCE.

And, isn't that what we really want? I think so!!

So – how will you commit? Let us know! I'm so proud of you already!