A DAY WITH DICK VAN DYKE – AND 10 LIFE LESSONS

Last week was quite a whirlwind. On Tuesday I received a message from Daryl Getman (AMAZING friend/performer/choreographer and also The Prepared Performers favorite Headshot Photographer) who is working on a new movie musical with Dick Van Dyke.   They were interested in having a family on set as extras in the scenes they were shooting with Dick Van Dyke a few days later. I had been speaking to her about this project, but I'm currently 7 months pregnant, and at risk for preterm labor, so I'm clearly not in any shape to be dancing. I figured there was no way I could be involved. So, when this opportunity popped up I replied “Yes! Yes! Yes!”

My 100% absolute favorite TV show is the Dick Van Dyke show (my husband and I even had a Rob and Laura Petrie themed wedding), I loved his movies more than any others as a kid, and eventually ended up performing with the National Tour of Chitty Chitty Bang Bang. So, being able to spend the day on set with him was seriously a dream come true.

Here's a quick rundown of our experience and then, the 10 Life Lessons I Learned from Dick Van Dyke.

The morning after we received the message from Daryl, we (my husband and 2 year old son) were whisked away to a costume shop in North Hollywood to be fit for the shoot. (Read more about that day here). I'm so lucky that costume designer, Dustin Cross, was able to find something that fit over my giant belly!

I really had no idea what to expect. I've worked on TV shows and films before, but never with a 2 year old in tow… and never while super duper prego. We arrived at the beautiful Disney Backlot at the Golden Oak Ranch at 6:30 am and let Frankie sleep in the car until they were ready to put us into costume. We then headed over to the trailer. In addition to the many crew members who were running around setting up, there were roughly 6 other extras (all beautifully dressed) and a darling little one (Alivia Clark) who is playing the title character. We proceeded to get dressed and it turned out that we had a little feature with Alivia and were actually the first to be needed on the set. Fun! 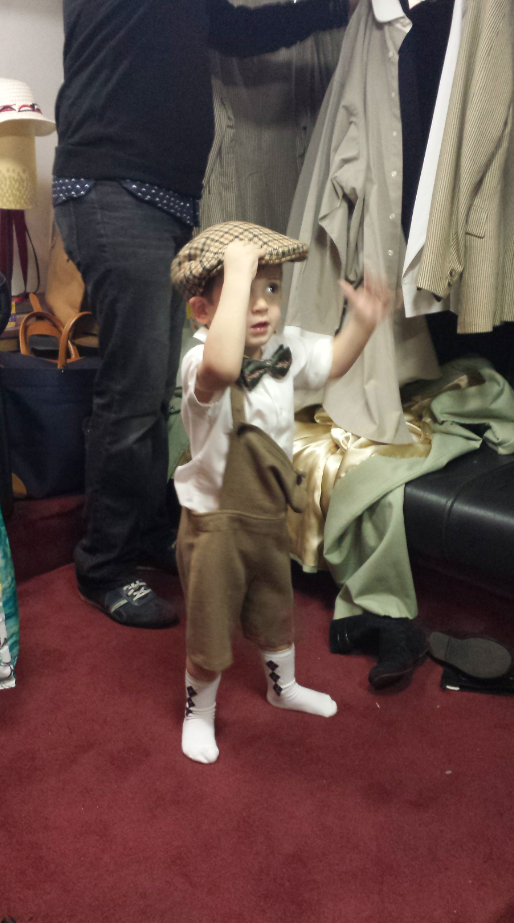 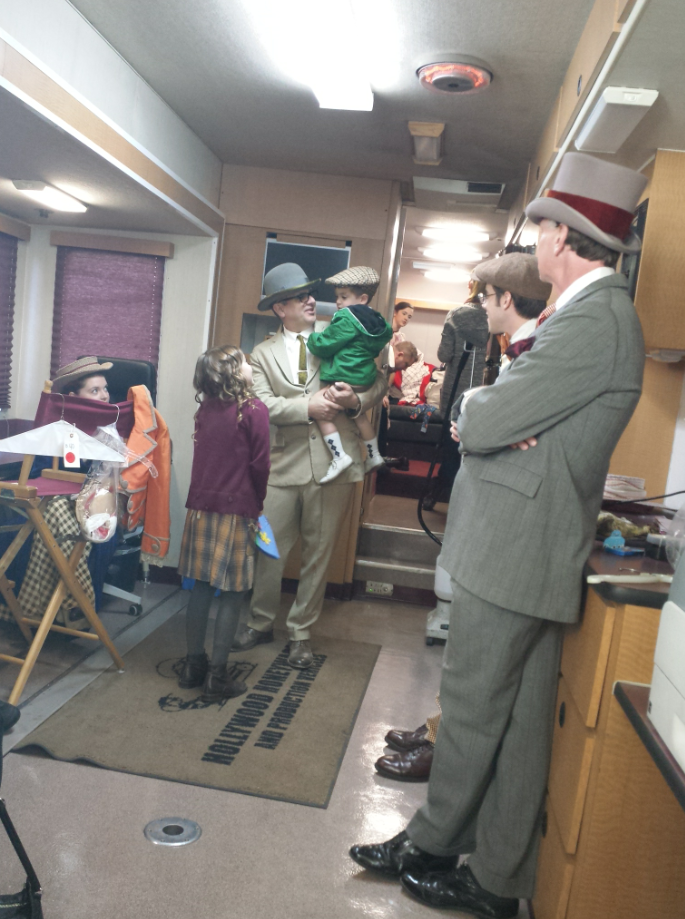 We headed over to the set for a quick rehearsal. Frankie sat on the steps by himself (which I was totally worried he wouldn't do) and Alivia came up and played with him for a bit before my husband and I came out to shoo her away. We did a few takes of this moment from different angles and everyone was so great with Frank. Many of the people working on the film had kids of their own. (The Director had a 1.5 year old and a 3.5 year old, so he totally got it). It soon became really clear that the most effective way to encourage him to do what they needed was to allow him to have fun. We didn't say “Sit on this step and stay there!” We allowed him to enjoy his time and he was totally enamored by Alivia, so it seemed to work really well. It was a little rough for me to figure out how to hit my marks while picking up a toddler who wanted to go in the other direction with this crazy giant belly… but fingers crossed we were able to make it work. 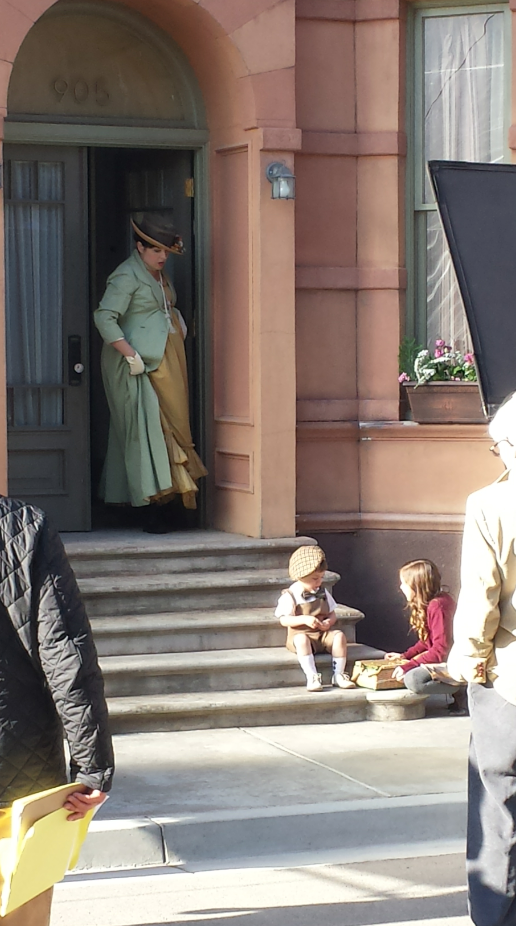 Things started to get really amazing when Dick Van Dyke showed up. He was so sweet and came over and said hello while we were shooting. (Thank you Lauren Vorsteg for taking these photos with my phone!) 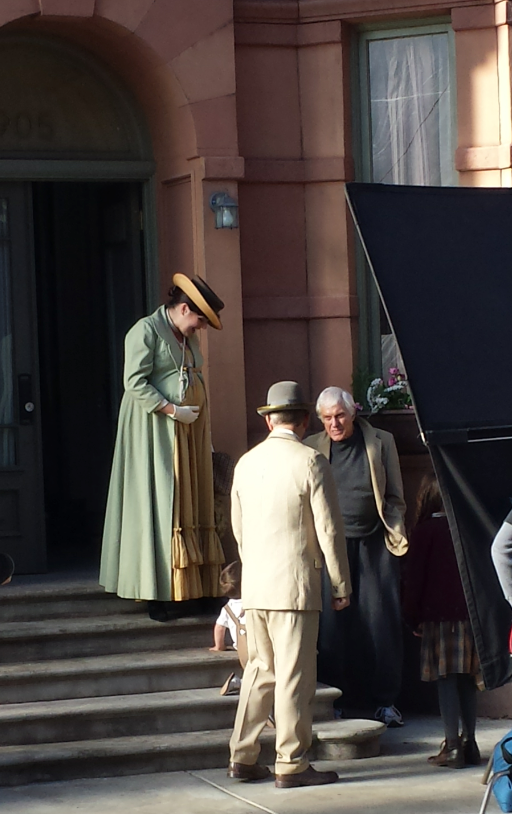 As the day progressed, I spent most of my time watching him work. He had a few scenes, a song/dance and a reprise that he sang with little miss Alivia. While watching him dance with Daryl during their rehearsal, I had to work really hard to hold back tears. He was charming, collected, giving it full out (even though he is in his 80's) with Capezio character shoes and all. (He said he wears them because they are so light and the hug his feet like a glove.) He also took time to talk to the cast and crew between takes and graciously took photos with all of us. He asked me if I was really pregnant or if I was just playing a pregnant woman and spoke about the episode of The Dick Van Dyke show all based on Laura's pregnancy where they weren't even allowed to use the word pregnant. Ha! (It's one of my favorites – and so worth watching – click here to see it) He also spoke about how he loves hoofing and how he doesn't understand why modern day dancers so often pay more attention to their feet than the audience. He was a true showman and a gentleman with that same unforgettable smile. 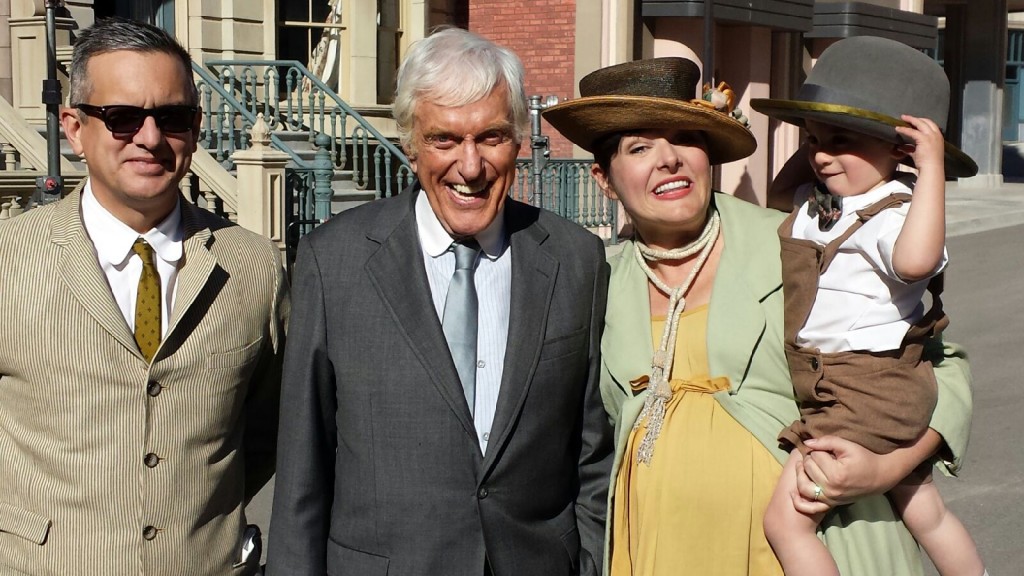 As we were driving home from a really long, really amazing day, I was so emotional. (Yes I'm sure it's partially hormonal… but only partially!) I was trying to explain why the day had had such a profound effect on me when I realized (as silly as it might sound) Dick Van Dyke's work as a performer on The Dick Van Dyke Show, Mary Poppins, Chitty Chitty Bang Bang and Bye Bye Birdie really symbolizes all that has lead me to my current world view.  The reason that I so love performing and sharing my love of the stage with my students, the reason I think it is so important to be positive, to live your life to it's fullest potential, to love with your full heart and most importantly, to laugh as often as possible. I put together this little collection of 10 lessons I learned from the some of the characters Dick Van Dyke has brought to life. I hope you enjoy!

AND – I'd love to know! What have you learned from the character's Dick Van Dyke brought into your life? Do you have a favorite Dick Van Dyke movie or episode? Let me know in the comments below! 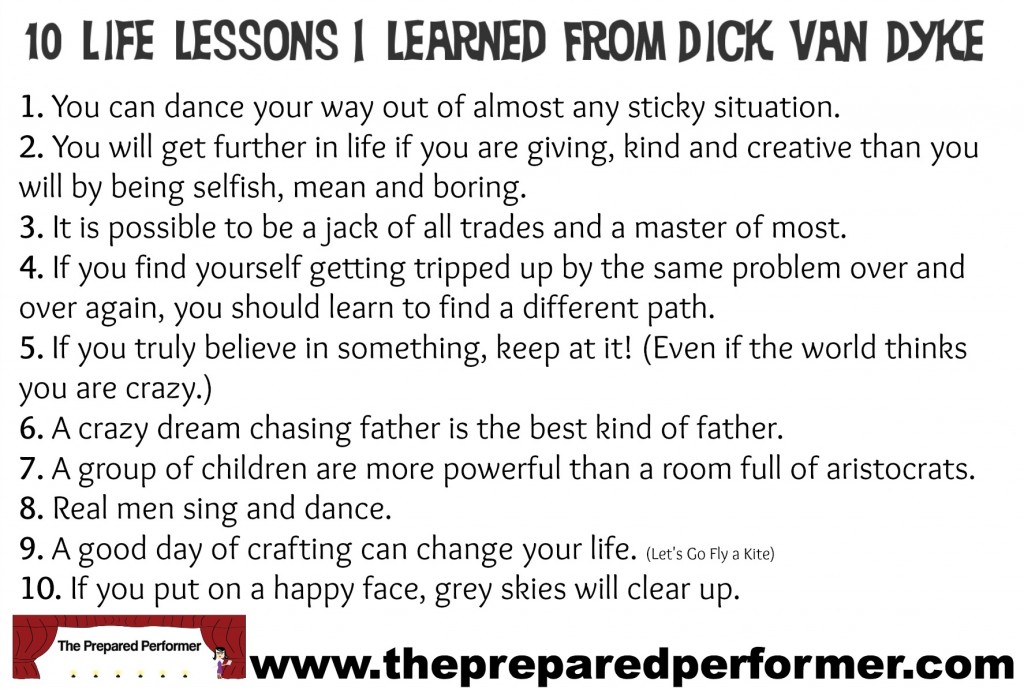