Gunshots are fired! Someone is poisoned! A murderer is on the loose, and it’s up to you to help “Miss Marble” solve the case. Teatime for Murder, by Moveable Mysteries, is a delightful comedic retelling of a good old Agatha Christie mystery that is currently running at the Maverick Theatre in Fullerton.

As a black curtain parted and I stepped in to a dimly lit room, I was instantly transported from a sizzling hot afternoon, into a peaceful and welcoming living room. Sociable ladies were scurrying about the room making preparations for a party. I was warmly greeted by an elderly woman named Mumsy. As she and her daughter Dotty escorted me to my seat, she explained it was her birthday and gushed with excitement that we showed up for her party. Soon a young fellow joined in on the preparations and chatted amiably with the audience. I love this part of the show! It makes me feel like I’m one of the cast members, and part of their story. (Through sly communication, I even uncovered a fellow Dr. Who fan while chatting with one of the characters.) This is my second visit to a mystery put on at the Maverick, and I have to say, I enjoyed it even more than my first. The cast included Tree Henson starring as Miss Marble, Maureen Lawrence as Dotty Esterbrook, Beth Titus as Mumsy, Wendy Carp Gallo as Helga, Christopher Yu as Robert Esterbrook, Alexis Chanel Ritchey as Rose Esterbrook, and Bob May as Inspector Horace.

The Teatime for Murder cast once again delivered a topnotch show. My favorite moment was watching Miss Marble and Mumsy as they sat ever so properly on a formal Victorian loveseat to drink a “cuppa” together. Silent, comedic puckering faces of the two biddies sipping their bitter tea, adding sugar cube upon sugar cube, had the audience in stiches. Titus captured the role of a sweet old biddy perfectly. Gallo’s portrayal of Helga was excellent. Her suspicious accent and her amusingly rough manner made me wonder if she was indeed the culprit throughout the show. The hint of eastern European red hair dye peeking through her babushka was a nice touch.

During intermission, we all sang a round of “Happy Birthday” to Mumsy, then characters swooped around the audience, handing out a delicious chocolate cake to share with us. Of course we were all there to help solve a murder, so we also used a slip of paper to make our accusations during this time. The cast deviously worked to persuade our conclusions as we wrote out our predictions. Their trickery worked on me—I was fooled this time. You can’t win ‘em all.

Overall, I would give

for a roaring good time! 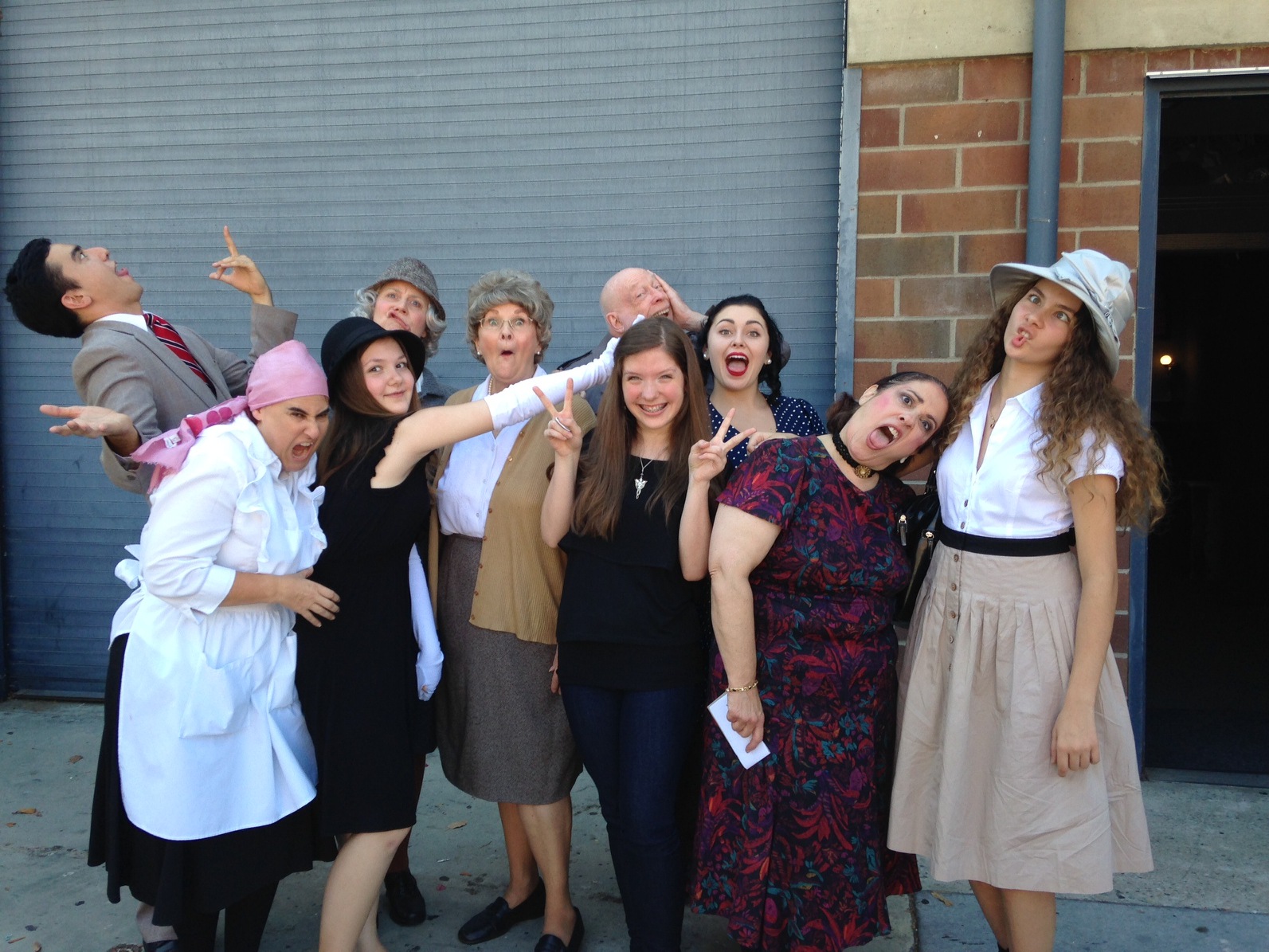