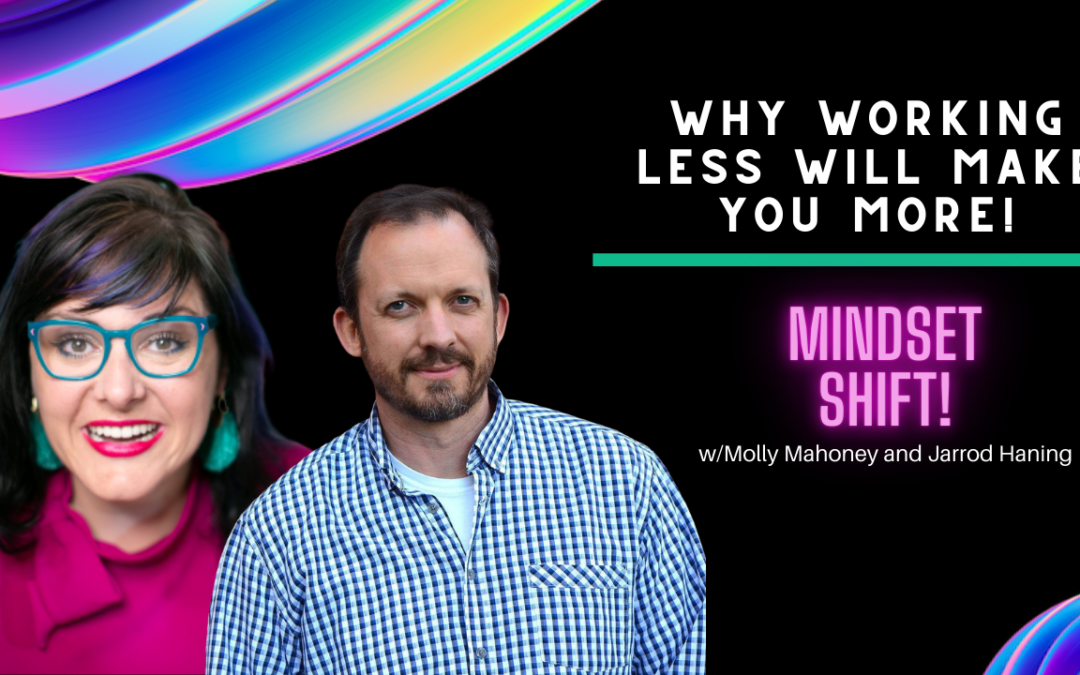 Work less to see better results? Crazy – or AWESOME? So often we hear that success requires…

The truth is… if you are working harder at the wrong things… it's just going to make it worse.
Spinning wheels, and no real progress.

What if you could discover your own unique map or super power strengths so that you could truly work in your zone of genius
AND work LESS to see better results!

Enter Jarrod Haning of Mindset Performance! Here he shares with us a clear, scientific path to leveraging your strengths and weaknesses and knowing which of those weaknesses to avoid.

He guided me through this process a few months ago, and let me tell you – it was so powerful!!

Jarrod is a father and an award-winning speaker who has been featured on NBC Nightline and has delivered four TEDx talks. He was also chosen by TED Global, as the featured speaker of the week. He specializes in a Nobel-nominated process that teaches you to think at a higher level and allows you access to different parts of your brain. For me, it reminded me of parts of my brain I have been keeping hidden. Most of his clients go on to double their income by working half as many hours. Sounds like snake oil, he knows. This type of work is not just for business owners, but also for parents and other folks, especially parents who also own businesses.

We both suffer from being a musician, which is quite the mental state. Before Jarrod was in full-time, dealing with mindset, productivity, and leadership, he was a principal violist with the South Carolina Philharmonic. When you’re engaged in music, you are using more parts of your brain than at any other time.

Go to the moment where you were first learning how to ride a bike. The training wheels had just come off, and you were still wobbly. In that moment in time, you had a crazy Aunt Jenny come by to give you some advice. She told you to go faster. You heard that and realized that’s why we call her crazy Aunt Jenny; that sounds like the dumbest idea ever. Then you accidentally went faster. In that moment, you felt more balanced. Now your brain understood what she was talking about.

There are so many things that are counterintuitive to us because of how we have been trained in our thinking. You should have a poster on your wall that says, “If you are doing the work, you are falling behind.” This is one of the reasons why “Work smarter, not harder” is possibly the most insidious advice you could be given. Why? Is that not what we’re talking about here? Not exactly.

When you do a task, it doesn’t matter how good you are at it or how fast you can do it or how much it pays. You get that dopamine hit once you complete it. “But doing it doesn’t address the reason it had to be done.” You’re going to have to do it again tomorrow. That’s the difference between lower-level thinking and the higher-level thinking of causing things to be done. That’s how you create free time and the results to show for it.

There are three things blocking your current success, wherever you’re at:

So how do you think of the thing that you can’t think of? That’s what Jarrod is going to break down right now!

“You can’t solve a problem with the same level of thinking that created it.”

You can’t solve a bad strategy with stubbornness. If it was going to work, it already would have worked. The lie we tell ourselves is, “The reason it didn’t work is because I didn’t apply myself.” Okay… But you’re already doing everything you know to do every day of every week. And that’s why Einstein said, “You need to try harder.” No, he didn’t. What he really said is, “You can’t solve a problem with the same level of thinking that created it.” So applicable here.

If you go to a corn maze, you’re not sure if you should go left or right. You may find yourself running faster through the maze. The faster you end up in the wrong place, the quicker you can find the right place. But going faster doesn’t fix being on the wrong road. When you stand on a ladder in the maze, you can see the whole thing, and there’s no longer any mystery. That’s obvious.

Another example is meal prepping. You meal prep for the whole week so that you don’t have to spend the time cooking a new meal each time. But let’s take it a step further. Why are you the one doing the meal prepping at all? I recently found a healthy food delivery service company called Splendid Spoon that I absolutely love. Look at me solving that problem.

Back to the bike. How do you think of that thing you haven’t thought of? The brain doesn’t work that way. It’s like imagining that your religious or political beliefs are wrong. But that’s where our breakthrough will come from: getting our perspective a few feet higher.

in the 1950’s Robert Hartman had his work nominated for a Nobel on how the mind makes decisions, values things, and structures those things. If you can tap into how your mind is making decisions, we can get out of that loop that is keeping us stuck. We are now able to map out how your mind is solving problems, which gives us amazing insights into our strengths, our weaknesses, why some people have the things we want, and why other people who should be doing well have so much stress.

I went through the MindScan. I will say that I was definitely focused on being right, choosing the right answer, while taking this assessment. The way it works that you’re given a series of things you have to put in order of importance according to your value system. Some things are just bad, so it’s like how to say one bad thing is better than the other bad thing. I found myself getting super analytical in justifying my choices. After completing it, I was proud of myself for having done it right.

There are lots of cool results, but the most interesting insight for me was that it shows you what you’re more naturally inclined to do and whether or not you’re actually using it right now. What I was very naturally inclined to do but wasn’t actually using was empathy. I have noticed over the past several months, maybe attributed to my father-in-law’s death that was incredibly painful for me, that I have been focused on the desired achievement, the structure, the streamlining, being very focused on the details of the process.

I am now taking singing lessons once a week in order to have more of a connection to my emotional center. Knowing that is one of my superpowers, I do believe empathy and care is a superpower, but I have blocked that for myself because I have been forcing myself to stay so focused on process.

Usually when people go through the process, they ask if they did it right. But there is no right answer, which is important to know.

EXAMPLE: These results are those of an entrepreneur:

The middle column which has to do with taking action, was really high.  This is someone whose mind had a high priority of solving problems by taking action. It makes sense that the more action we take, the more results we get. Whenever we pull the Type A achiever aside, they pride themselves on getting things done, but they also say that there is always more on their list than they have time to get done. They try harder to clear things up. But then it feels like they spent most of their day on little tasks someone else should be doing, which is unfulfilling. They’re hustling so hard and achieving so little.

Jarrod guarantees that nine of ten things on your to-do list could be outsourced to someone else provided they have the right system to follow. When this way of thinking shows up, we call it the Chevron of Stress. What really happens here is your brain is just looking for more things to do. Productivity is not about getting things done; it’s about causing things to be done.

Quickly, think of someone you know you consider to be very successful. They own multiple businesses and don’t work multiple full-time jobs. They always have more than enough time and money and connection with friends and family and self. It feels like they have the touch of gold. Their kids are even seemingly perfect. If you don’t know anyone like that personally, you have an idea of someone like that in the world.

Whenever we do a MindScan of someone like that, they are low in that middle column of taking action. Why does someone who values taking action so little have the best results? They have a high value in solving problems by connecting with people and a high value in systems, structure, and planning. What do these two things have to do with getting anything done?

Whenever this pattern shows up, we call it the Leadership V. In leadership, your job is to build systems and relationships. If you are checking something off of your to-do list, because you spent your time doing something instead of building something, then you will have to do it again. Bad strategy. Instead, document and delegate the thing. You can scale that. There is no limit to how many systems and relationships you can have to support you. That’s why the leader spends time on things that scale, allowing them enough resources. You can hire a person to do these things, or you can develop a system to automate these things.

I am currently planning a 3 D’s day for our GLAM members. We are having a Delegate and Delete day with Documentation!

Anytime you hire someone, you need to think hard about that. Would you rather do the work or manage the person doing the work? Neither of those are ideal. But when you document the process, you are now able to delegate it without having to manage them. The system does it for you.

When you are thinking like a leader, then you know that it doesn’t take any time to document at all. They have the person look over their shoulder while they do it, take notes, and document the process. That person formats it like a manual with pictures and bullet points. They then flip through the manual and know if this person really understands what to do or not. It took them so little time to train them and build the system all at the same time.

If this whole mid shift idea excited you and you want to take it a step further, I really encourage you to take the Mindscan! You can do so by scheduling a call with Jarrod here.

Get it touch with Jarrod